The image below shows the general purpose infrared-transceiver I’ve built to control all kinds of devices remotely with the help of a computer. It is fully compatible with LIRC and has a long operating range due to the power transistor and buffer capacitor. 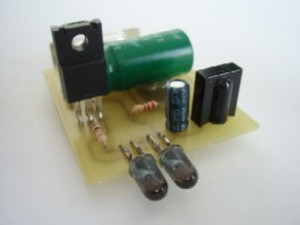 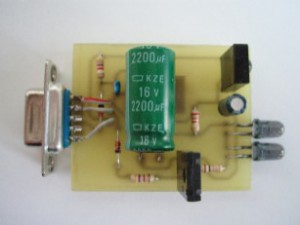 Another advantage of this design is the low-drop regulator mounted on the underside of the PCB, which makes it possible to use this transceiver on notebook-computers with low serial port voltages. The transceiver can be attached directly to the serial port and doesn’t need any external power source. 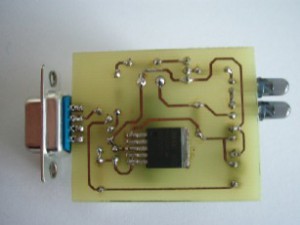 The schematic listed below is pretty straightforward, and consists of a relatively small number of components.
IR1 is an integrated infrared receiver and is connected directly to pin 1 (DCD) of the serial port. Pin 4 (DTR) is connected to the base of power transistor Q1 which acts as an amplifier for the infrared signal being sent. Buffer capacitor C1 ensures high enough currents can run through the IR-LED’s D1 and D2 to achieve maximal operating distance. Depending on the actual transistor and LED’s being used, the value of R2 needs to be adjusted to allow for a safe current to run through the LED’s and the transistor.

REG1 is a 5V low-drop voltage regulator and provides a stable power-source for the rest of the circuit. If the transceiver isn’t to be used in combination with a notebook-computer, the low-drop regulator can safely be replaced by an ordinary 5V regulator like the 7805, which needs an input voltage of at least 7V.

Most components used to make this device were either salvaged from old hardware or sampled.
The transistor was taken from an Epson printer and the LED’s from an old remote control. The low-drop voltage regulator REG 104FA-5 was sampled from Texas Instruments. Because the regulator had an smd package, I decided it would be easiest to design a small PCB for the transceiver. 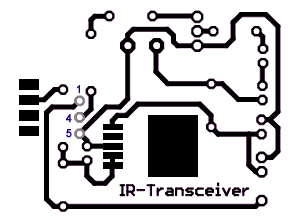 When using this PCB, be sure to connect pins 1, 4 and 5 of the serial port connector with wires to the corresponding holes in the PCB, as can be seen in the pictures and the schematic.